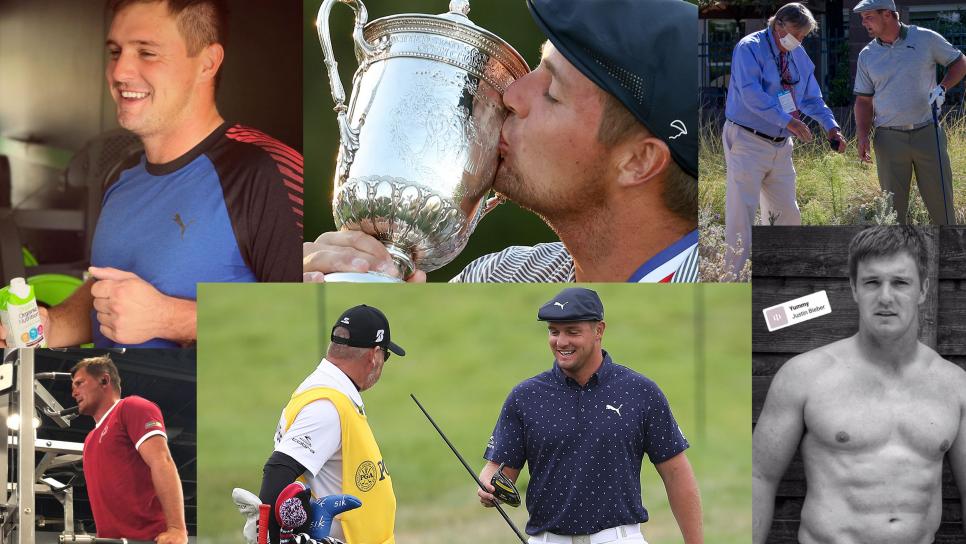 50 things that happened to Bryson DeChambeau in 2020

Wth all due respect, no one made more headlines in 2020 than Bryson DeChambeau. From important happenings on the course to the mundane off of it, golf’s biggest lightning rod constantly kept fans talking. To that end, we’ve put together a list of 101 things that happened to Bryson this year. That’s right, one HUNDRED and one things. So grab a protein shake (or three) and let’s get to it.

1. Started his playing year with a missed cut on the European Tour.

2. Put on a lot of weight before COVID-19 paused the season.

3. Put on a lot more weight while COVID-19 paused the season.

4. Played a lot of Fornite.

6. Did a “Challenge for Charity” hitting balls into his backyard net.

7. Said he “loves” the European Tour cracking down on slow play.

8. Was given a warning for slow play on the European Tour two weeks later.

9. And then bogeyed his last four holes to blow a chance to win on European Tour in Dubai.

10. Took this funny photo with Brooks Koepka in Abu Dhabi.

11. Said he had better abs than Brooks Koepka.

12. Showed off those abs with an aggressive shirtless pic.

13. Got daggered by Brooks’ “Four-pack” response.

14. Drove the green on TPC Summerlin’s 382-yard par-4 seventh hole in the first round of the Shriners Hospitals for Children Open.

15. Drove the green on TPC Summerlin’s 382-yard par-4 seventh hole in the second round of the Shriners Hospitals for Children Open.

18. Became the first to win a PGA Tour event while averaging 350 yards per drive.

20. Had to move back because the Harbour Town driving range couldn’t contain him.

21. Bogeyed the 71st hole to lose the WGC-Mexico Championship by one.

22. Bogeyed the 71st hole to lose the Charles Schwab Challenge by one.

23. Had a career-best streak of seven consecutive top 10s on the PGA Tour.

25. Wore a golf shirt with math equations on it.

26. Signed with DraftKings to become the first golfer to wear logo of a sports-betting company on a golf cap.

27. Made a college-style signing day video ad for Bridgestone.

28. Gave away signed pairs of shoes to healthcare workers during quarantine.

30. Was on the cover of Sports Illustrated.

31. Snapped his driver at the PGA Championship by leaning on it.

32. Replaced his driver and still contended at the PGA Championship.

33. Drained a 95-foot putt at the PGA Championship.

34. Climbed as high as No. 5 in the Official World Golf Ranking.

36. Revealed he wishes he were taller. (Maybe he should have drank more milk as a kid.)

38. Said he got a “garbage ruling” while making that 10 at the Memorial.

39. Tried to get a free drop due to fire ants in Memphis.

40. Got made fund by Brooks Koepka for trying to get a free drop due to fire ants in Memphis.

41. Was called “the most interesting man in golf” by the Washington Post.

44. Was said to be “making a mockery of the game” by Matthew Fitzpatrick.

45. Impressed Rory Mcilroy with his length off the tee.

46. Impressed Phul Mickelson with his BOMBS off the tee.

47. Impressed Jon Rahm with his length off the tee.

48. Also confused with his length off the tee.