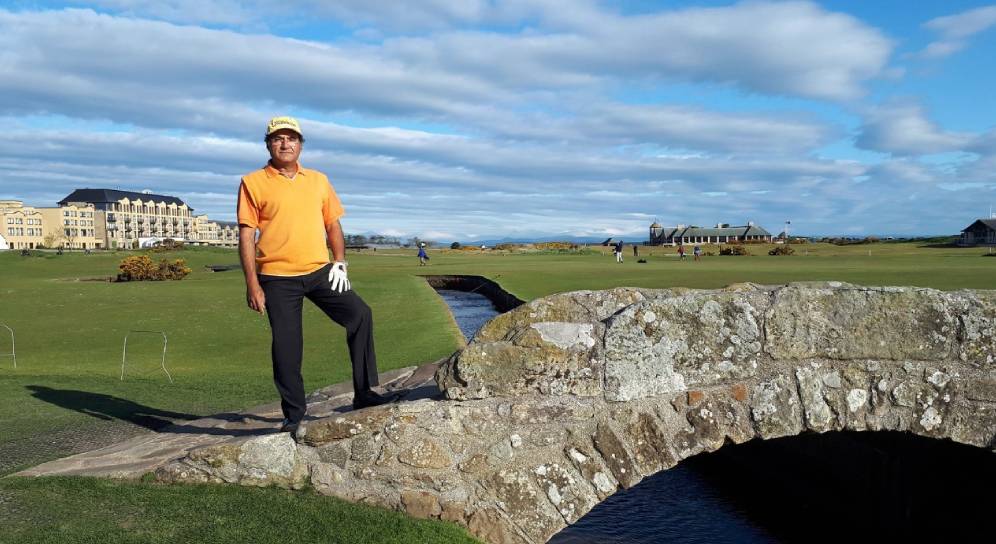 Q). When did you start playing Golf and who introduced you to Golf?

I started during exercise Zarbay Momen and my commanding officers Lt col Moeen Rauf introduced me to this game.

Q). How does it feel like to be the first Level-3 Qualified Referee of Pakistan?

I am grateful to God for this success but it is now indeed a great responsibility to remain current on Golf rules as golfers expect a right rulings from me so I have to study every day and test my memory.

Q). How was the experience of visiting the Home of Golf in Scotland?

If words could explain they would have been dancing in joy on screen. My first round and saint Andrews was in 2017. It is indeed totally different feelings when you walk through the fairways that the golf legends walks through. My second round at old course was during My TARS Level-3 February 2020, it is very difficult to play and concentrate on game as every bunker and every green is full of history especially  Bobby Jones bunker at hole 11th who later founded Augusta National , first played St Andrews in the 1921 The Open.  During the third round, he infamously hit his ball into a bunker on the 11th hole. After he took four swings at the ball and still could not get out, he lost his temper and continued the round, but did not turn in his score card, disqualifying himself. I landed in the same bunker and did double bogey. So it was amazing feelings apart from game of golf as there is a history, speed of green and the blowing wind on coast a big challenge.

Q). What is the importance of the referee in the game of Golf?

Rule 1.1 say play the ball as it lies and the course as you found. What if the ball in under water in a penalty area should he go back home as he can’t play now thus it is the referee to provide him the choices under golf rules to continue playing. Mostly golfers thinks that referees are there to impose penalties but actually it is the referee who save them from extra penalties and provide them options under the rules to play and enjoy.  It is an interesting and challenging task , not to penalize a golfer unnecessarily and at the same time not to provide an  them an advantage over other golfers in the same field.  To create that balance and move the game in right direction is an art of refereeing.

Q). which is your favorite Golf Course in the World?

Pebble Beach Monterey, Beautiful, long distances and challenging. I learned a new terminology in golf there on greens “Gravitational pull”.

Q). Advice for Upcoming and Junior Golfers of Pakistan?

They must take golf as a profession as soon as possible with dedication and hard work.  Golf is a profession like doctors and IT engineers but with rich rewards/ money and fame. They must struggle for that and taste its sweetness.

Q). Please share you experience as the referee of the Golf Tournaments Held in Pakistan?

Refereeing in Pakistan is still like a small plant standing in the sun without flowers.  It is the weakest side in our tournaments. My teachers and friends are John Permoure PGA and Ryder cup tournament director and Kevin Feenney European Tour Chief referee, I take advises from them and try ti implement the Euro standards of checks and refereeing in Pakistan. We can’t produce good golfers in the absence of true referees and golf rulings. It is the referee’s job to set up a course , pin positions, adjust green speed, tees,  define and mark the 4 specific areas on course to facilitate smooth play under favorable pace. Pakistan needs qualified referees to produce world class golfers.