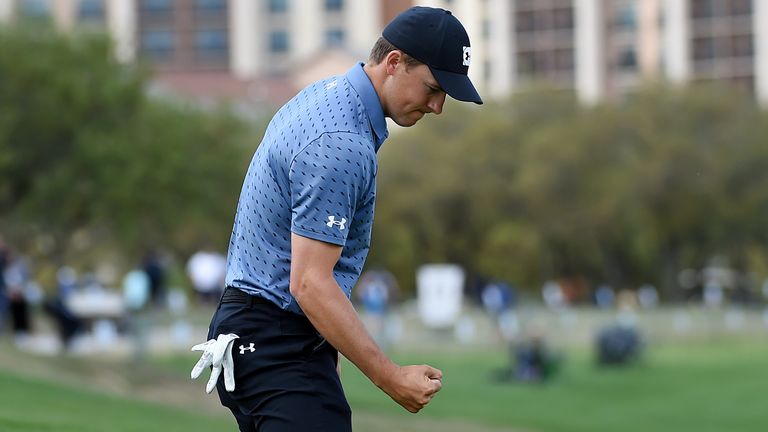 A long road came to an appropriate conclusion Sunday for Jordan Spieth, who shot four straight rounds under par to pick up a two-stroke victory in the 2021 Texas Open. It is Spieth’s first victory on the PGA Tour since 2017 as the 27-year-old has struggled to find his game after an incredible start to his professional career.

Spieth (-18) shot 67 or better in three of the four rounds at the Texas Open, closing with a 66 on Sunday to clear second-place finisher Charley Hoffman by two strokes. He birdied three of his final six holes Sunday and shot par or better over his final 14 holes to end the tournament.

Having climbed from 92nd in the world to 53rd since January, Spieth now has the second-best odds (+1000), per BetMGM, to win next week’s Masters at Augusta National, trailing only world No. 1 Dustin Johnson (+900). Bryson DeChambeau, Jon Rahm and Justin Thomas are next at +1100.

With three top-five finishes in his last five stroke-play events, Spieth entered Sunday sharing the lead with Matt Wallace at 12 under, his tour-best third 54-hole lead of the season.

Spieth replied in style by holing out from five feet to birdie the short par-four 17th and go two clear again but a nervy second at the 18th, which he pulled short and left, gave Hoffman another chance which he failed to take as they both made pars.

“There’s some key moments here and there, different time periods where I felt like things were turning around. There’s also moments I look back on where I hit balls till my hands bled and I wasn’t doing the right thing and I just went home thought about it; sleeping, lost sleep. This sport can take you a lot of different directions. So I think it’s just most important to embrace when I have moments like this and just really appreciate them and keep my head down, keep the process that I’m doing. Obviously things are starting to work without feeling like I quite have it all, so that’s a really good sign. Take some confidence into next week as well.” — Jordan Spieth