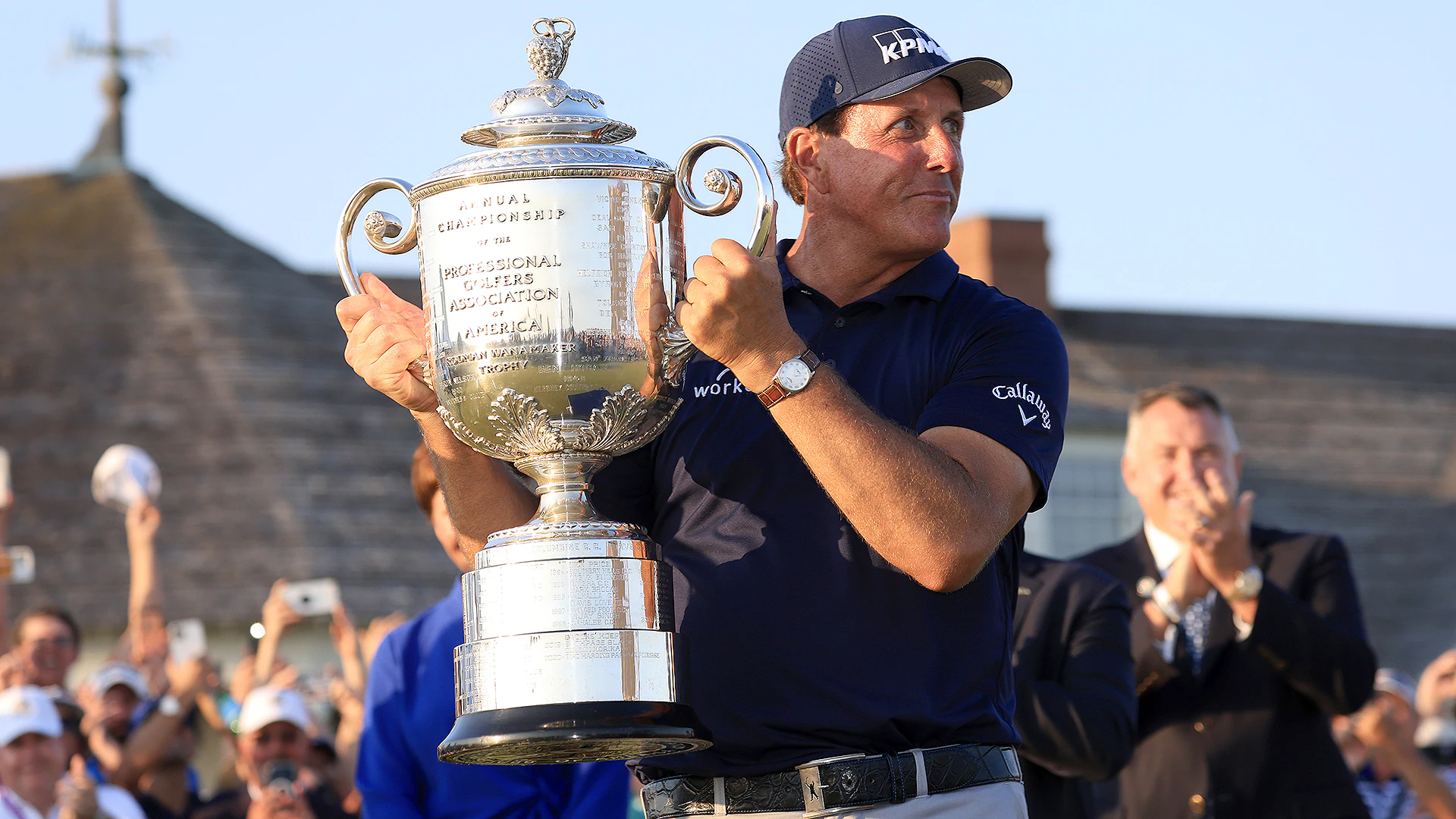 His latest act was a real stunner: A major champion at age 50.

Mickelson captured his sixth major and by far the most surprising Sunday at the PGA Championship. He made two early birdies with that magical wedge game and let a cast of contenders fall too far behind to catch him in the shifting wind of Kiawah Island.

He closed with a 1-over 73, building a five-shot lead on the back nine and not making any critical mistakes that kept him from his place in history.

Pure chaos broke out along the 18th hole after Mickelson hit 9-iron safely to just outside 15 feet that all but secured a most improbable victory. Thousands of fans engulfed him down the fairway — a scene typically seen only at the Open Championship — until Mickelson emerged into view with a thumbs-up.

Chants of “Lefty! Lefty! Lefty!” chased him onto the green and into the scoring tent, his final duty of a week he won’t soon forget.

“It’s very exciting because I’ve had a few breakthroughs on being able to stay more present, be able to stay more focused, and physically, I’m striking it and playing as well as I ever have but I haven’t been able to see that clear picture,” said Mickelson.

“Although I believed it, until I actually did it, there was a lot of doubt, I’m sure.”

Mickelson, who now has two PGA Championships to his credit, became the oldest major champion in golf history Sunday. Julius Boros, who won the 1968 PGA Championship at 48 years old, saw his record supplanted by Mickelson – who turns 51 on June 16.

The victory came one week after Mickelson accepted a special exemption into the U.S. Open because at No. 115 in the world and winless the last two years, he no longer was exempt from qualifying. He had not finished in the top 20 in his last 17 tournaments over nearly nine months. He worried that he was no longer able to keep his focus over 18 holes.

The PGA Championship had the largest and loudest crowd since the return from the COVID-19 pandemic — the PGA of America said it limited tickets to 10,000 — and it was clear what they wanted to see.

The opening hour made it seem as though the final day could belong to anyone. The wind finished its switch to the opposite direction from the opening rounds, and while there was low scoring early, Mickelson and Koepka traded brilliance and blunder.

Koepka flew the green with a wedge on the par-5 second hole, could only chip it about 6 feet to get out of an impossible lie and made double bogey, a three-shot swing when Mickelson hit a deft pitch from thick grass behind the green.

Mickelson holed a sand shot from short of the green on the par-5 third, only for Koepka to tie for the lead with a two-shot swing on the sixth hole when he made birdie and Lefty missed the green well to the right.

Regardless of the start, which got many viewers thinking of heartbroken years-gone-by, it was the finish that mattered.

Phil Mickelson, age 50, is a PGA Champion once again.

“There’s no reason,” Mickelson said, “why the game of golf can’t be the game for a lifetime.”